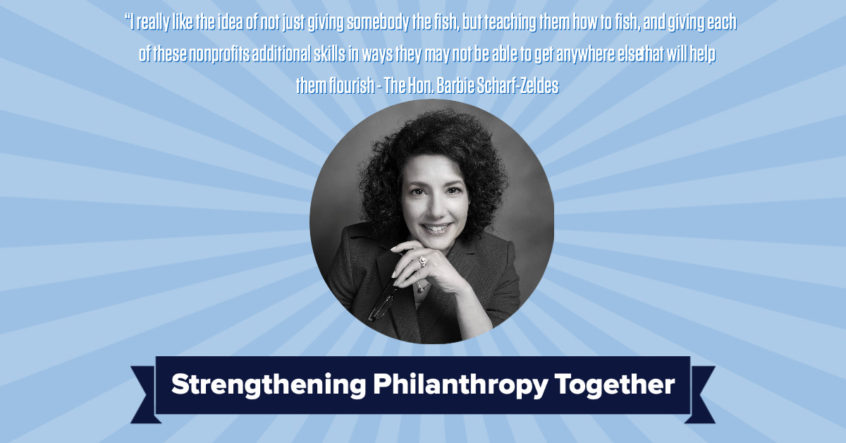 In Judaism there is a tenet called repairing the world. That principle has been a guiding force in the life of Barbie Scharf-Zeldes, a Bexar County associate judge and SVPSA Partner.

“That’s something I carry with me, that I’m repairing the world in little bits and pieces wherever I go,” she said.

Scharf-Zeldes’ life is a testament to that goal. It not only drives her professionally, but also fuels her commitment to community service. She’s served on nonprofit boards, provided leadership in her faith community and has served as an SVPSA Partner for the last four years.

A theme running throughout each part of her life is caring for some of the most vulnerable people in society.

Scharf-Zeldes is the associate judge in Bexar County Probate Court 1, appointed to the position a year ago by Judge Oscar Kazen. The court covers more areas than most people realize, she said, handling wills, guardianships, mental health cases and issues of eminent domain.

It’s a role she’s been preparing for for nearly three decades. She spent 28 years as an attorney in family law and all areas of probate. She’s also a mediator and provided legal counsel to San Antonio police officers and firefighters relating to family law, probate and estate planning. She worked on guardianship and probate issues of officers killed in the line of duty, assisting the family members they left behind. Her responsibilities included helping families probate the wills of their loved ones, and if no will existed, identifying heirs and establishing guardianships for children with pension benefits.

As a lawyer she was inspired by Probate Court 1 Judge Polly Jackson Spencer, who always looked for ways to create win-win solutions.

“When I had questions and I’d talk to Polly, she would say ‘I’ve never tried this, let’s see if that works,’” she said. “That’s always been my approach. There’s always a way to address the problem and always a solution to be had.”

When Scharf-Zeldes was invited to join the board of the San Antonio Lighthouse for the Blind, she was happy to accept, especially as the daughter of an ophthalmologist. She ultimately served as board chair, overseeing a successful capital campaign resulting in a new 30,000 sq. ft. building for the organization. She found the work both fascinating and gratifying.

“To give back to the community in that way I felt was easy,” she said. “It was a labor of love because I could see it was helping other people.”

That passion for helping has also guided her involvement in the Jewish community. She served as president of Congregation Agudas Achim, a San Antonio synagogue, for two years.

When she learned about the SVP model and read Paul Shoemaker’s book Can’t Not Do, the concept inspired her.

“I really like the idea of not just giving somebody the fish, but teaching them how to fish, and giving each of these nonprofits additional skills in ways they may not be able to get anywhere else that will help them flourish,” she said.

She sees the nonprofit world as playing a role in addressing what she sees as one of the most pressing issues facing San Antonio: caring for a tsunami of elderly.

With a growing aging population comes the challenges of finding enough caregivers and addressing the needs of that population. Her court is already seeing the challenges facing older adults who require care and have limited income or no family members available. It’s a problem that will continue to grow, she said.

“Our greatest concern is how will we be able to address that population and those needs,” she said. “It’s a very real concern.”

It’s the kind of problem that may require public/private collaborations or nonprofit solutions. Whatever it is, Scharf-Zeldes will do what she can to help find solutions.

“It just goes back to the way I look at things,” she said. “I’m not just going to take no for an answer. There’s got to be another way.”