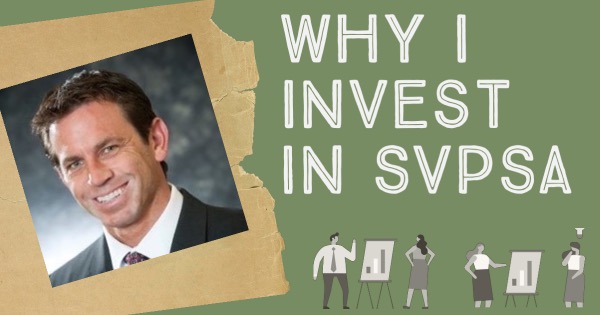 As a wealth management advisor with over two decades in the financial services industry, SVP Partner Justin Pawl understands return on investment. That’s what makes him a big believer in SVP. For Pawl, SVP’s appeal is its adoption of the venture capital model that investors use in private enterprise: building smaller organizations and helping them scale by investing not only dollars, but professional guidance.

“To me, the SVP model allows us to address some of the most intractable problems that communities face with something more than just dollars,” Pawl said. “If dollars were the solution to everything we wouldn’t have the problems we have. It’s clear you need more to address problems that money alone cannot solve.”

As a founding partner, Pawl was instrumental in establishing SVP in San Antonio. A friend who was involved in SVP Austin told Pawl and his colleague John Eadie about the organization’s innovative approach to philanthropy.

“It sounded like a really unique and novel way to approach philanthropy,” he said. “We thought there might be a role for that to play in San Antonio.” Pawl was involved in SVP’s first-ever investment in Youth Code Jam, a program providing free and low-cost coding classes and activities to children.

The start-up was the epitome of the SVP model, Pawl said. Founder Debi Pfitzenmaier created a program to teach coding in a fun, engaging way to young students, including underprivileged children. Her vision gave young people access to a quickly growing, high-paying industry they otherwise may not have had exposure to. Despite a great concept, securing funding to scale and grow the organization was challenging.

When Pfitzenmaier planned to compete in Philanthropitch, a local Shark Tank-style competition to raise money for nonprofit organizations, SVP partners coached her on how to express the value of her organization’s programming.

“She ended up winning the lion’s share of the money that day,” Pawl said. “She attributes that success to the resources we invested, but also to the direct coaching on how to tell her message and convey the unmet need that she was providing.”

Another one of Pawl’s favorite SVP initiatives is Catchafire, a nationwide network of experts who donate their time and expertise to help nonprofit organizations. He describes Catchafire’s return on investment as “through the roof.”

SVPSA and corporate sponsors initially raised $100,000 to invest in Catchafire. Since then, the program has provided nearly $1.2 million in value for San Antonio nonprofits, with more than 6,000 hours of professional time and expertise delivered. The average value that San Antonio nonprofits receive from Catchafire is $4,000 every day.

“To me that’s a fantastic return on investment,” he said. “With the coaching they get through
Catchafire, these organizations are able to grow much faster than they would without access to these network experts that are within Catchafire.”

Catchafire also addresses the many challenges facing nonprofits in San Antonio, Pawl said. With a multitude of organizations addressing different needs in the community, resources can be spread thin. By connecting local nonprofits with a national network of assistance on everything from legal issues to website development, Catchafire can help more organizations.

“I think what SVP is doing with Catchafire is helping on a broad scale, reaching far more organizations than SVP could touch alone to build scale and give them the expertise they need to grow,” he said.

It’s part of the innovative, results-driven approach to philanthropy that Pawl sees as driving real change. “Innovation is one of the reasons that the United States is the greatest country in the world,” Pawl said.

“Applying that innovation on the philanthropic side to solve these problems is just super important and super powerful.”